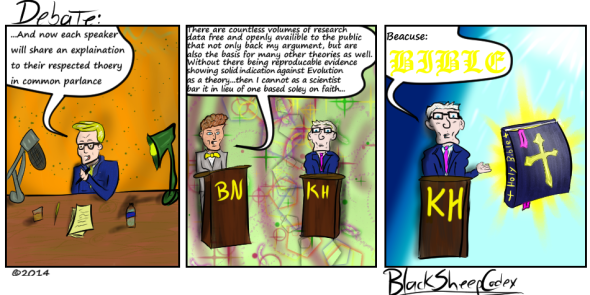 So I’ve had this one sitting around for a bit now…but I finally got around to putting words to it. Now I’m sure this isn’t going to sit well with a number of people…there are two things that are guaranteed to bring the worst of a conversation…and that would be poking fun at Politics and/or Religion, the debate happened to be covering both. Now I don’t care what you believe in….and I mean that I don’t care…and so long as you keep it to yourself I see no problem with an easy-going and mutually respectable society. Then there is the issue of the future generation, what to teach them…how to guide them to expand our civilizations knowledge and therefore the level of comfort we are able to enjoy (forget lengthening our term to live on the planet). Now I watched this debate hoping to be washed over with intelligent facts and maybe even opening my horizons to ideas I hadn’t yet considered…..these were two scientists after all…not just regular speakers. For the first 40 minutes of the program it seemed like it was going to be a very interesting debate: good points brought on by both sides and interesting questions directed at the other. But once it got down to the nitty gritty I was disappointed in the response from the creationist side of things. Now a closed mind is never a good way to approach any item that is unknown or questionable….and while Bill Nye did his best to bring forth parallel knowledge/studies to back his side, Ken Ham did essentially nothing but repeat himself and add in “because of the magic of God” (paraphrased of course). Now like I said I don’t care what you believe…but if you’re going to try to prove that creationism is a viable education for up and coming scientist than the results of one book versus thousands, snarkily footnoted with “because God” isn’t going to cut it. It is important that we continue to progress in the sciences, and until there is more proof to show that creationism is anything less than religion belief…I suggest we keep it out of our centers for learning.

16 Feb This entry was written by CatastroFUCK and published on February 16, 2014 at 5:53 PM. It’s filed under Idiot-Morons, Teach Me and tagged Bill Nye, Creationism debate, I'll fix this..WITH SCIENCE!, Ken Ham, speaking in tongues, talking in circles. Bookmark the permalink. Follow any comments here with the RSS feed for this post.