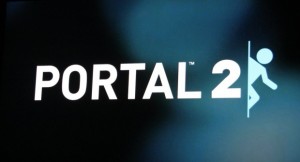 Portal was a smash hit that teleported its way into our hearts with the release of the Orange Box (quite possibly the coolest kind of box). With a gripping tale propelled by dangerous science experiments and promises of cake, its hard to imagine anyone not loving it. Starting last night the sequel was released for pre-order in all reputable game stores (is that an oxy-moron?). Our friends at the Aperture Science division released a video tutorial to help those having difficulty choosing a gift for their woman this year(cuz lets face it not every woman gets to have their dreams come true in my bed). Watch the vid after the jump and go preorder Portal 2 which <strong>SPOILER ALERT!!</strong> I will be totally buying and loving. Also Marvel v Capcom 3 came out today, which if your cool you have already and are getting your ass whooped by yours truly.

15 Feb This entry was written by CatastroFUCK and published on February 15, 2011 at 12:10 PM. It’s filed under Awesome and tagged Aperature Science, i dont know womens, marvel, me rockin you, pew pew pew, portal 2, teleport, valve, video games!. Bookmark the permalink. Follow any comments here with the RSS feed for this post.