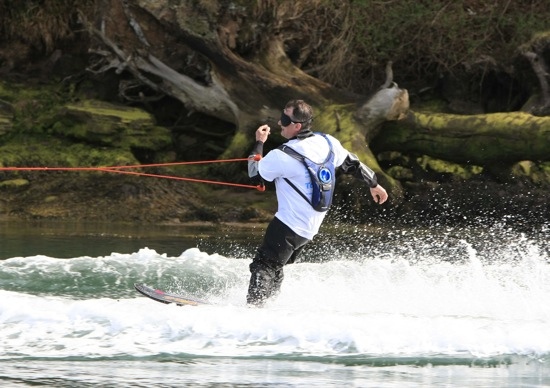 There’s a new world record for blindfolded waterskiing! British software engineer Steve Thiele destroyed the previous record of 20 miles in 1hr by 3 miles in the same timeframe, bringing the current standing to 23.83 miles in 59 minutes and 45 seconds. There is a little controversy around the record however, as Steve is already blind and thus the blindfold doesn’t impeded him(plus they just had him sitting in the kiddie pool with an industrial fan blowing on him for an hour). Regardless of nay-Sayers, Guinness has declared him record holder w/o argument. This wasnt the 45 year olds first time on the skis, he used to compete in the British disabled water-skiing olympics. I personally don’t contest his record, I mean I’m an alcoholic and I can still hold the beer drinking gold cup(and fill it too!). Speaking of which what is the record for time submerge in a vat of amber beer? And also…can I drink it to pass the time?

13 Apr This entry was written by CatastroFUCK and published on April 13, 2011 at 1:45 PM. It’s filed under Awesome and tagged blind determination, drinking, I could do better..cuz I'm awesome, making waves, stupid phone sucks for tagging, that's not how I use blindfolds, water scares me. Bookmark the permalink. Follow any comments here with the RSS feed for this post.