Loud and not gay-an update on our trip

this is just kid of a note of how things are going here, nothing fancy

So my trip is going really well so far (ie:got absolutely fuckin hammered and got home after daybreak). I got a bit of business done, which was mostly just DNS shit and meeting with a possible future writer, then headed over to the bar where I rightfully belong. Well the night progressed and KGC (came along for administration purposes….to keep me out of jail)and I decided to scour the nightspots and see which place we could fit in best and possibly score some company. A few hours of booze and KGC bitchin about having his writing privileges revoked, we decided that it was all or nothing now…so we started with flaming shots and moved from bar to bar determined to have a grandius night. 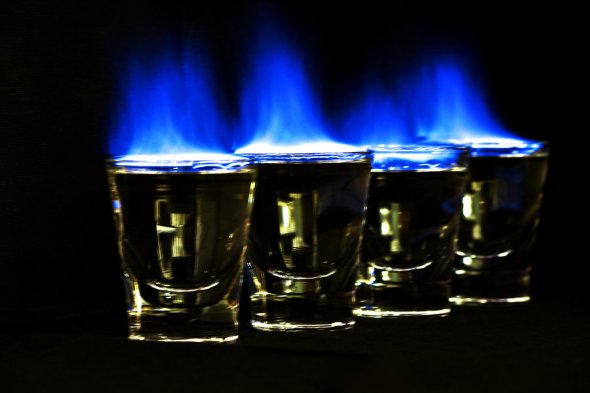 This is about where my stomach started to queeze and my memory started to blur. I do remember staggering into a club pumping with old pop/techno mixes and propping myself up at the bar. This place was awfully colorful and I was reduced to keeping my sunglasses on like some sort of douche-bag from a certain small, industrialized state’s water line. I found a few beautiful women to assault with my tangled pickup lines, but mostly the words just fell directly out of my mouth and to my feet knotted with liquor and stupor. 4 or 5 drinks after my last attempt at female companionship KGC met up with me after similar failure and it was time to get rowdy and (even more)belligerent to cope with or failures….the liquid of choice for that was Irish car bombs(shot of Baileys and Jameson dropped in a Guinness and chugged) with a Jon Daily(sweet tea vodka and lemonade) chaser. So apparently in our feebled state we got a little obnoxious and were pretty vocal about what ever petty observations that happened to break thru our foggy eyesight(think like a three year-old pointing out an old ladies saggy boobs).

Your child will never miss an opportunity to point these out

Sometime around the point we were laughin hysterically at some fat (and I mean FAT, like 350LBS) dude trying to swipe in on a gorgeous woman on the dance floor , a rather stylish man with a burly laugh introduced himself to KGC and myself. We responded the best we could as our faces had gone numb quite some time beforehand, broken stories of our lives then followed. Some drinks and perhaps a puke later, the man leaned in close (but did not whisper mind you) and said “so is this you boy’s normal hangout or would you want to go somewhere with a bit more pizazz”. We took all of 10 seconds to gain the entirety of the question and gauge the proper response, finally we retorted with a less than certain tone “sure”. The mans hearty laugh filled the club once again and he said “great! I know that The Packing Sailor is having a guys only drag night”. Now we like costume contests as much as the next guy, but there’s just something about the small niche of drag that doesn’t appease us, plus the “guys only” thing made it sound an awful lot like a gay bar, which would drastically reduce our already terrible odds at landing a lady.

This wasnt the type of drag he was talking about

Being a few truckloads of liquor in our subtlety kinda went out the window, so our reply was something along the lines of “Is that a gay bar? cuz my man meat only goes in tacos”. Admittedly that was probably not the kindest response, but lets face it we had enough booze to kill Jack Daniels himself and i was just happy to be able to form a full sentence. The man wasn’t offended by our lack of etiquette luckily (as he was like 230lbs of muscle and could have killed us with a fart)and apologized for assuming anything sating that “you guys were so loud and obnoxious without any girls around…I just figured you were gay”. I had never realized that “Loud and Proud” were literal depictions, but hey you learn something new everyday. The large man, KGC and myself then continued to drink at the bar with a new-found objective-not being so boisterous. Paul (as it turns out the large fellows name was) ended up helping us contract some lady-friends before he took off for the end drag competition, he was such a nice guy…I hope he won if he entered. The ladies and ourselves ended up taking off to a few other clubs and getting so drunk that we apparently got permanently banned from a particularly nice one (If dogs can pis on plants then so can we), this went on for a few hours till we all had to part ways..plus nightclubs close at 6am.

Look at it...its just begging to be pissed on

Oh speaking of dogs there was a retriever in my room when I got back this morning…I’ve been looking for a receipt but cant seem to find one, so I guess I’ll just take care of her for now till I find the owner, which means I need to go get dog food……..Hey you think I can trick KGC’s drunken ass into eating dog food, they do kinda look like Reese’s cereal. Oh well that’s how things were going for the first day….hope I can remember most of today.

Shes a cutie isnt she

Oh and I know I wont be able to post the normal stuff till the week so do you guys want another one of my old dark writings or do you just want to wait till I can write again? Let me know

17 Apr This entry was written by CatastroFUCK and published on April 17, 2011 at 11:47 AM. It’s filed under Story Time and tagged adorable, alcoholics, beer is good and stuff, call the boys for a party, car splodey, clubbin-and not the seal kind, flamboyace, HADOUKEN!, i had buffalo wings, plants are there for me to pee on, woof woof!. Bookmark the permalink. Follow any comments here with the RSS feed for this post.