Google is our dear and glorious leader!

Take a look here at what intrepid Google Earth explorers (aka lame/fake/lazy) discovered recently in that wonderfully open and not at all secretive country of China. Obviously something this byzantine and mysterious will always defy explanation, right? 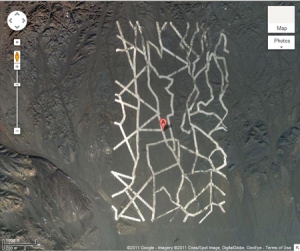 The only explanation; Communist China be crazy

The internet has given us some wonderful and sinister tools over the years. Facebook, blogging, YouTube and Google Earth. And like all of humanity’s myriad creations these wonderful inventions can be used for the betterment of our species or to mercilessly destroy our enemies. What was my point again? Oh yeah, Google Earth has been one of the more interesting playthings of this new virtual universe, allowing us to scan the surface of our insipid little planet, pretending to be CIA agents or whatever. There’s something wonderfully perverse about trolling the whole world looking for naked people or peering into supposedly top-secret military installations/paint factories like creepy little voyeurs.

That said, Google Earth has turned up some wonderful little nuggets over the years. Including tsunami capsized ocean liners, cars parked on the sides of buildings, a figure made of African mountains listening to an iPods and many, many black helicopters which totally proves the Illuminati rule us all and stuff.

The latest find by beady-eyed web-users includes these startling and surreal sculptures in China’s Gobi Desert. These zigzagging and circular shapes and grids are undoubtedly a striking image, but perhaps just as remarkable are the theories the basement dwelling denizens of the web have come up with to explain them. Of course there’s the usual ‘its aliens’, because everything’s fucking aliens to you lot, isn’t it!? Other ideas include runways for experimental aircraft (that land in a zigzag pattern, clearly) and weapons testing grounds.

I don't know about you, but I like to park my fighter jet at China's mega-Stonehenge

My personal favourite has got to be, however, that the grids are carefully constructed recreations of major American cities used to plan invasions by Chinese troops. This isn’t just ridiculous, it’s also convoluted nonsense. I’d love to see the baffled Chinese forces as they’re parachuted into Washington DC and instantly lose their shit because there are buildings everywhere, not just white roads carved into a flat, featureless desert. Because what would actually be achieved if this were true? What would be learned that couldn’t by carefully studying a map and satellite photographs? Honestly, I love the stupidity of our race.

The most reasonable (and plausible) explanation comes from Jonathan Hill, research technician and mission planner at the Mars Space Flight Facility at Arizona State University who believes that the grids are satellite calibration targets.

“Satellite cameras focus on the grids, which measure approximately 0.65 miles wide by 1.15 miles long, and use them to orient themselves in space. The 65-foot-wide white lines that make up the grids are not made of reflective metal as many news sites have suggested. ‘They have gaps in them where they cross little natural drainage channels and the lines themselves are not perfectly filled in, with lots of little streaks and uneven coverage. I think it’s safe to say these are some kind of paint.”

So there you have it, a perfectly reasonable and kind of interesting explanation.. He also says that the US has a similar system in place. And I believe it because the man speaking works for a University space programme, rather than someone who lives in a commune and writes a blog about Lizard people from Sirius B.

24 Nov This entry was written by badbabbler and published on November 24, 2011 at 9:02 AM. It’s filed under Tech, WTF and tagged aliens, China, Communism, conspiracy theories, Gobi Desert, Google Earth, Spy Satalites, the illuminati, WTF is that?!. Bookmark the permalink. Follow any comments here with the RSS feed for this post.

One thought on “Google is our dear and glorious leader!”