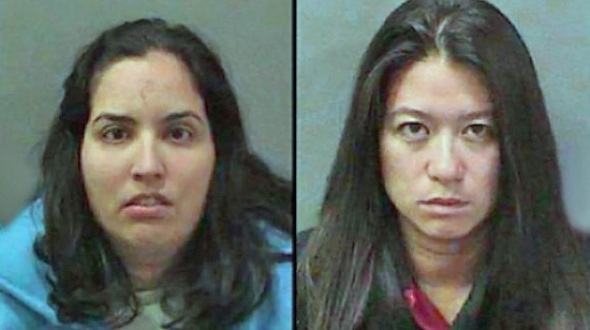 Mrs. Robin Antonella Pabello (right) and Mrs. Alexa Johzen Polar (left),respectively a school teacher and a paralegal, Got together one day and thought to themselves the American Realization (comes after the dream), “I am way not rich or successful enough to be pleased with this, my life”. An average affair at best, one many bar and restaurant outings revolve around….their decision to remedy the situation: not so average. They forged a check from the firm Mrs. Polar worked for, you know just to make a little extra money for the holidays. Oh wait, no I’m sorry my mistake, they forged it for $285,000
and used it to procure a private jet to New York where themselves and a group of friends rented 5 hotel rooms overlooking Times Square. After landing and playing Dumb & Dumber in real life(does anyone remember that movie?), the group went out to put a deposit down on a $3.7 million house and go shopping (because apparently none of that other shit is as highly praised as shopping in a woman’s mind…but then again don’t know many womens *cries*). They got caught, SURPRISE! The accounts were shut down and they were arrested and flown back to LA to be tried and probably never live a decent life again. You’d think the combination of a school teacher and a paralegal would have reached the cut off point for “intelligent enough not to do completely retarded crime”, but you’d be wrong…oh so wrong. They didn’t even try to cover their tracks, they just followed thru with their plans using only brute force and ignorance to guide them. I would at least wrote an IOU and said I was only borrowing it, saw it on Law & Order and it worked so hard(FALSEHOOD!!!…total falsehood)

13 Dec This entry was written by CatastroFUCK and published on December 13, 2011 at 9:43 PM. It’s filed under Idiot-Morons and tagged forged in the fires of Mordor, i dont know womens, IOU, lot o' moolah, too drunk to type, what NOT to be like, your special...and by that I mean dumb. Bookmark the permalink. Follow any comments here with the RSS feed for this post.