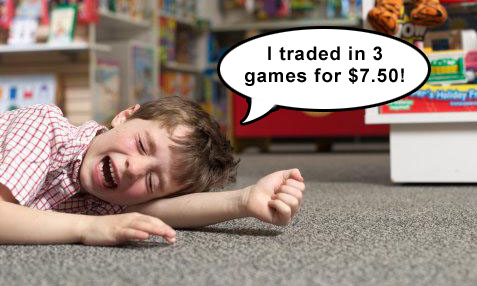 We are all familiar with the concept of pre-ordering a game. It used to be that with popular games you needed to reorder it if you wanted to get it within the first week, but that fizzled out when companies started taking it too far and purposely under-shipping so they would sell out and then ship a new batch when the buzz hit its peak(many companies still use this tactic). Typically the only reason you would pre-order a game now is to get some kind of exclusive content or some sub-par quality action figure. But UK electronic entertainment vendor “GAME” has put a new spin on the pre-order, they are allowing you to pre-order used games….before the new ones are even out. It is actually quite a great plan for them you see because vendors make more money on a used game than they make on a new one. That’s why game companies like Sony and Microsoft love the download, not only does it save them manufacturing/shipping cost but also prevents the re-sale of used games(the profits of which they wouldn’t see). GAME’s program would allow you to purchase used copies of future games like Crisis 2, Dragon Age 2 and Homefront prior to their release, essentially what this does s once they get a trade-in on that particular game it ships out to you at a fraction of the price (33% off apparently). So it’s a first come first serve deal, but still pretty smart for them to try. Better than my Extort option for new games, where you would pay me to go all commando on some kids teeth and steal his game for you. What ‘s your opinion on the used pre-order? WIN or FAIL?

04 Mar This entry was written by CatastroFUCK and published on March 4, 2011 at 4:10 PM. It’s filed under Games and tagged deliver it to my house, games, I got what you need, i have beaten you!, lost all my money on that, me rockin you, one mans trash...., trade it in, used and abused. Bookmark the permalink. Follow any comments here with the RSS feed for this post.