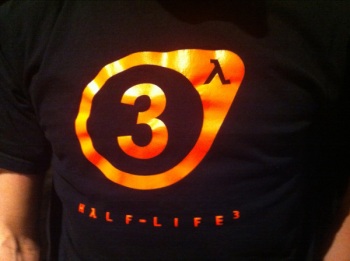 Remember Half Life 2? Of course you do. It was aces. It’s one of the greatest shooters of all time, and reinvented the genre that its very predecessor reinvented back when Doom and Quake ruled PC land. And its made by lovely Valve, the developers of wonderfully whimsical Team Fortress 2, excellent online distribution service Steam and sheer genius, first person puzzlers Portal 1 and 2. They’re the people you can’t be mad at, because they may not understand the concept of a deadline or that buying goddamn hats for Team Fortress characters isn’t something anyone really wants to do, but hell, they’re just too… nice.

But they ain’t perfect. Their plan to release their follow ups to Half Life 2 episodically started out well enough, with a nice slice of Episode 1, but then Episode 2 dragged and dragged, but at least it eventually came out. Episode 3 however, hasn’t even been glimpsed, let alone released. Many doubt Valve have even started it, having abandoned their episodic plans as ‘stupid’. Who really knows though? As for a non episodic bit of Half Life, well there’s no work at all on that either. Until today.

At a game developer conference, someone from the developer Uber Entertainment, spotted this random, anonymous Valve employee sporting a Half Life 3 shirt. He seemed perfectly fine with someone taking a photo of this and sending in across the globe via twitter. As for what this actually means, either Valve is hard at work on the game behind locked doors or they’re trolling the shit out of us. The devils! As usual, only time will tell. I just wanna know what happens to Freeman, Kleiner and Alyx! Is that too much to ask?

02 Dec This entry was written by badbabbler and published on December 2, 2011 at 1:47 PM. It’s filed under Awesome, Games and tagged epic troll, Freeeeeman!, Half life 3, nerdgasm, portal, Steam, valve. Bookmark the permalink. Follow any comments here with the RSS feed for this post.

Older: Woman ‘imprisoned’ by Scientologists for 12 years at sea
Newer: Action RPG by Square-Enix in the Works, No Name Yet